I have never felt complete without horses. And for a long time, I associated this basic, primal need with riding. But as I grew older, and learnt more about myself, I came to the conclusion that I did not need to ride to be happy. I only needed some form of contact with horses. Simply caring for them, for their needs, being around them, was enough to make me happy. And after I was finally able to buy my sweet Alex, and share my life with him, I started riding less and less. He was in a good enough shape to do much more than what I was asking of him, that wasn’t the question. But I could tell that he didn’t want to, not any more. So I started retiring him, and riding less and less, until I reached a point when I was not riding at all any more. And I was happy.

After my kindred spirit died, I felt so broken that it became inconceivable for me that I could ever ride a horse again. The simple thought of being around horses put such a tight grip on my heart I was afraid it would stop. I wouldn’t even look at the horses I could see on the side of the road, grazing in their fields, as I was driving. Something that had always been so essential to me had suddenly become damaging and scary. But the complete absence of my equine friends was also, in a way, making things worse. They had become as essential to me as breathing.  I was caught in a gap, a divide, and I had no idea what to do.

Estelle, my former instructor (and the one who originally saved Alex), whom I admire and respect profoundly, helped me through this. Thanks to her, I managed to dip a toe in these waters again. It helped me remember exactly what horses meant to me, and how I could not give this passion up. And I am so grateful for that.

I rode a couple of time in between. Once with Estelle, and twice on my own, here, in Canada. And it all came rushing back to me. Feelings I had forgotten. The wind rushing in my ears as my horse is cantering. The feeling of the tight leather riding chaps against my calves, and through them, that singular warmth irradiating from the horse’s flanks. My fingers lightly playing on the reins, and how the horse would respond to it, with their mouth, on the bit, and how it would vibrate all the way back to my hands. Feeling every muscle of mine working independently, and yet connected in the grand scheme, like a well-oiled machine. The horse’s body moving under mine, and being able to tell exactly what was good, or what was bad, about it. Knowing how the littlest muscle, the little move, could influence the horse’s attitude greatly.

And more importantly, that dialogue. A conversation the rider has to set up with the horse. Finding the right way to ask. Always ask, never order. A silent dialogue, that a non-trained eye cannot perceive. A dialogue that has to be so discreet it seems like rider and horse are in communion, exchanging thoughts telepathically. The magic of it. I fell in love all over again.

I will never find again the sensations I had when I was riding my sweet Alex, and I know nothing will ever even begin comparing to them. I will never again find a similar connection that was, in some way, truly telepathic. And my heart still bleeds from his loss, and always will. But I have found that I can still enjoy it, with other horses, in different ways, without betraying his memory. His legacy. I can cherish it, without it diminishing my love for him in any way. It’s not a betrayal. It’s not a rebirth. It’s not even moving on. It’s simply sticking to my core, and my needs, the ones that I can fulfil at least. And I can feel a part of him in every other horse. An aspect, a mannerism, a whiny, a movement, a way to communicate with me … There’s a part of him in every thing. I just have to know where to look. It will never bring him back. And maybe, just maybe, it is not fair of me to search for him in the other horses.I know they are unique entities. That they are their own being, have their own self. But I carry him with me, wherever I go. Always. 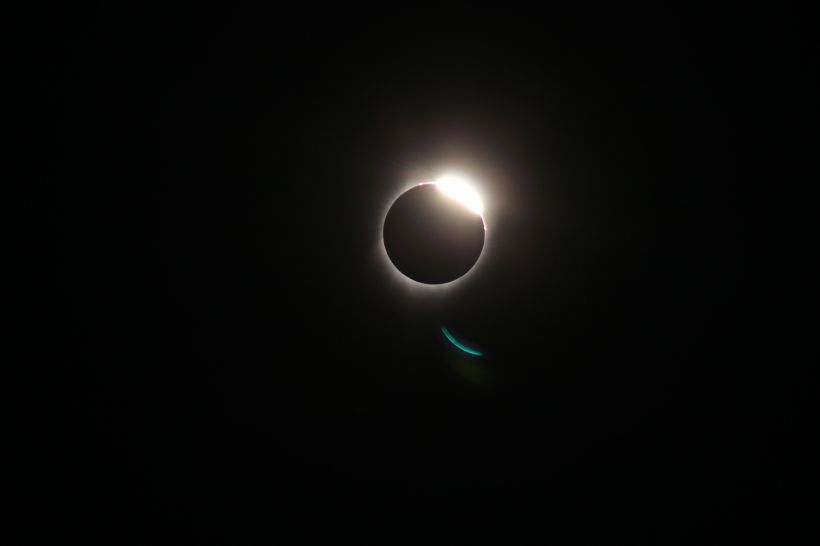 “The night is dark and full of terrors!” someone screamed, quoting Melisandre from Game of Thrones, bringing a round of amused, and somewhat scared, laughter as the moon started swallowing the sun, over the skies of Oregon.

The second our planet’s satellite overshadowed our star completely, people cheered and applauded. But they did not do so for long. The heavens turned so dark stars were shining in the midday sky. Temperature dropped so intensely shivers were running down our skin.  And nature went silent. Everything, and everyone, had gone quiet. It was a silence so thick a knife could have cut through it, so heavy it made breathing hard; not that anyone even dared breathing too hard or too loudly. No bird, no animal, no insect made a single noise. Hair rose on the arms and back of some people’s neck. People were fascinated. And they were scared.

Even now, with all our knowledge, a total solar eclipse is an incredibly eerie and uncanny experience. And I think of ancient times, when people did not know what an eclipse was, or how it worked, and how terrified they must have been. They must have thought the end of days was upon them, that hell had come to swallow them whole. Even a lunar eclipse could prove to be a terrifying experience : Christopher Columbus managed to predict one with enough accuracy that he had native Americans believe he held control over the moon, and could make it disappear and reappear at will, prompting the Native Americans to keep helping him. The moon disappearing was a terrifying experience, supposed to bring about all the horrors from their legends.

“And everything under the sun is in tune,

But the sun is eclipsed by the moon.”

But as incredible as a lunar eclipse is, it cannot even begin to compare to a solar eclipse, let alone a total one. I am amazed that our ancestors did not go mad in the sudden darkness. Norsemen believed that a giant wolf, Fenrir or his son, Sköll (sources vary on this) would swallow the sun whole and bring about Ragnarök, the end of days. Every civilization had similar tales, believing that the disappearance of the sun would offset the balance of the world, and cause untold chaos.

And as I was watching the eclipse, thinking of the times of old and how it would have affected people back then, Pink Floyd’s song just went through my mind, as real and intense as it would have been had I been listening to eat with earphones, and it was just the perfect length for this eclipse.

I was lucky enough to have seen one as a child, on August 11, 1999, in France. My parents drove over one thousand kilometres for us to witness that amazing event. I was only five at the time, a young age to remember something solidly, even something as amazing as an eclipse. I hold no memories of the sun being swallowed by the moon, the sudden cold as sunlight was being eaten away, and the stars appearing in the midday sky. I never forgot, however, the uncanniness of it. We were near a farm, and nature was so full of life. And as the eclipse approached its stage of full totality, nature started going silent. Horses, sheep, chicken, cows… they all went silent. And they remained so until sunlight started flooding the Earth again. Nature roared back to life in an instant, as if the silence had been but a dream.

But my five-year old self never forgot the feeling of eeriness that floated through the air. I had been marked for life. And experiencing that feeling again, after 18 years, was extraordinary. It was just as I remembered it, perhaps even more incredible; after all, my memories, as sharp as they were, must have been dulled by time, very much like a blade. And it awoke something inside me. I have always loved the dark. As I’ve said before, I find it comforting. And the dark an eclipse brings, that special, gorgeous kind of darkness, has me hooked.

While everyone was staring at the sombre heavens, mystified, terrified and in awe, unable to make a move or a sound, I laughed. I could not hold back the laughter that was building up in my body. I, too, was mystified and in awe, but I revelled in it. I was drunk on that eerie feeling, and wanted more. I wanted so much more. These 130 seconds of totality felt only like a single heartbeat.

So I will chase the eclipses from now on, all over the world. I will hunt down that feeling, and bathe in it. And so should you.